Traditional rigging for sailing vessels is not a job for the fainthearted.

Besides having to commit hundreds of knots, splices and leather- and woodworking skills to mind and muscle memory, rigging involves fine detail work and intricate knowledge of traditional techniques passed down through generations. The safety of crew and the structural integrity of the ship is literally in the hands of the rigger. Among sailors, those who decide to pursue rigging as a career are in the minority, a dedicated few who still feel drawn to it to make the lives of their fellow sailors safer and easier.

Professional rigger Becca Buckler began sailing small boats at a young age and graduated to tall ships at age 17 when she joined the schooner Westward in 2004 as a sail trainee. Finding that the tall ship sailing life agreed with her, she signed on as a deckhand on the Black Dog schooner Alabama out of Vineyard Haven, Massachusetts, in 2006.  Her interest in traditional rigging techniques eventually led her to a career as a rigger, most recently working in the rig shop at Mystic Seaport Museum, Connecticut, before branching out and opening her own business, Reef Point Rigging.

At 471 gross tons, the Oliver Hazard Perry is one of the largest tall ships in the American fleet and the largest full-rigged ship to be built in the country in over 100 years.

In April 2019, Becca was contacted by the tall ship Oliver Hazard Perry for a special rigging inspection. The Perry, the largest civilian sailing school vessel in the United States, was launched in 2012. Based in Newport, Rhode Island, she is a three-masted square rigged vessel and is the largest full-rigged ship to be built in the country in over 100 years, and at 471 gross tons, is one of the largest tall ships in the American fleet. Most recently, the ship adopted a year-round operations model, running programming in Rhode Island and New England in times, such as the winter months, when many other tall ships are finished for the season. 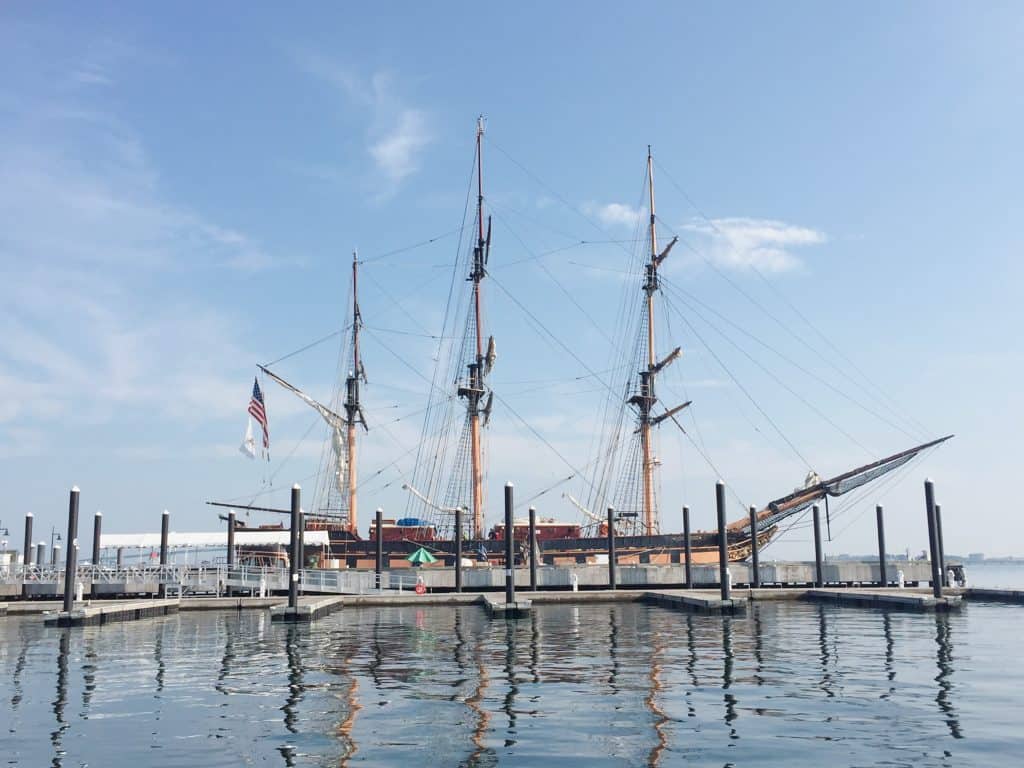 Based in Newport, Rhode Island, the Oliver Hazard Perry is a three-masted square rigged vessel and is the largest full-rigged ship to be built in the country in over 100 years.

Under CEO and master, Captain Jonathan Kabak, formerly Director of Marine Operations for the U.S. Merchant Marine Academy (USMMA) Sailing Foundation in Kings Point, New York, the ship spent spring of 2019 undergoing a refit and maintenance. Although her hull is steel, many of her spars – her masts and yards – are made of solid wood timbers. Unfortunately, over the course of the last several years, the ship’s fore topmast had developed structural deficiencies and had been slated for replacement, but the replacement hadn’t yet been completed. The US Coast Guard’s request this spring was for a 3rd party rigging survey to assess the foremast. Additionally, Becca’s inspection determined that the fore topgallant mast would have to come down for the same structural issues. Although this was a bigger project than originally thought, it made sense for it to be done in conjunction with the topmast replacement. 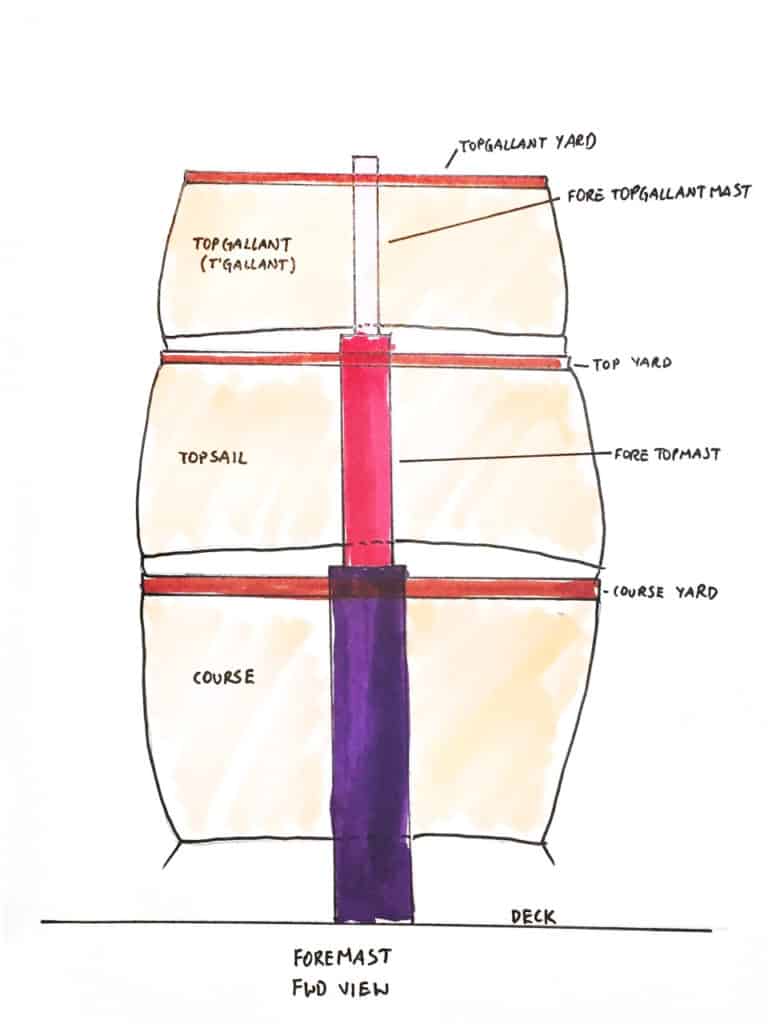 This massive downrigging and subsequent uprigging project required a dedicated team and a chance for women to shine in a traditionally male field. Although Becca started out with only a few crew, word of mouth through the tall ship sailor’s network quickly attracted hands to the project. “I was able to bring together a great crew who really made it all possible,” she said. Managed by Becca as lead rigger, the team of riggers and deckhands included fellow female sailors Madeleine Weisman, Mary Rose Hobbins, Katie Steiger, USMMA cadet Tara Mulligan, and third mate Georgia Hilton.

This involved a lot of aloft work, where crew members would climb or be hoisted more than 120 feet into the air and remain up on the mast for hours at a time, secured only by climbing harnesses.

In June, Becca and her team began the project by sending the three foreyards down from aloft, as well as all the standing and running rigging attached to the masts. Then the two wooden mast sections were carefully sent down and removed. This involved a lot of aloft work, where crew members would climb or be hoisted more than 120 feet into the air and remain up on the mast for hours at a time, secured only by climbing harnesses.

The downrigging took just seven days. The uprig, on the other hand, took nine days, with the crew working continuous 10-12 hour days. “It’s always faster to take things apart,” said Becca. “Putting them back together involves a lot more adjustments and putting on seizings vs. cutting them off.” Besides just re-hoisting the masts, there was also the re-rigging of all yards, the standing and running rigging, and the bending on of the sails. Becca also noted that just on these new mast sections also took a lot of time – “Being brand new spars, there was a lot of final fitting work.” 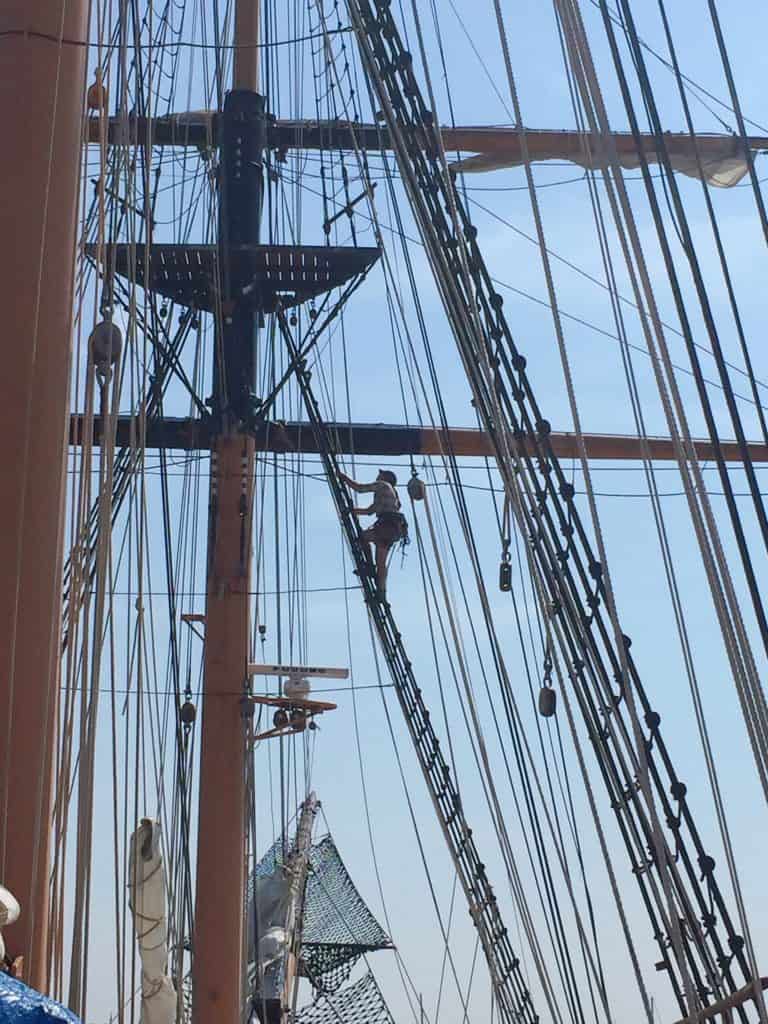 The final fitting work was still being done the morning of the Perry’s first sail of the season on July 30th – welcoming two members of the US Coast Guard who needed to conduct a final rig inspection to make sure that the ship was ready to welcome program trainees on board. The crew took the ship for a spin through Newport Harbor, and Becca was on hand to fine-tune any adjustments to the rigging and help with the setting of sails on the brand new fore top- and topgallant masts. For the Coast Guard inspectors, it was a successful trial of the Perry’s sailing capabilities and the new foremast sections. For Becca and the crew, it was especially rewarding to see the sails unfurl for the first time, a fitting conclusion to their hard work for the past few months.

“I love constantly being challenged, to think of creative solutions to unique problems. There’s a balance of both artful details and simple efficiency.” – Becca Buckler

It might seem daunting to take on a rigging project like this, on such a grand scale and with so much on the line. Becca likens rigging to putting together a puzzle. “I love constantly being challenged, to think of creative solutions to unique problems,” she says. “There’s a balance of both artful details and simple efficiency.” In the end, when the puzzle is all put together, with every rig piece neatly in its place, it’s time for her to move on to the next one.